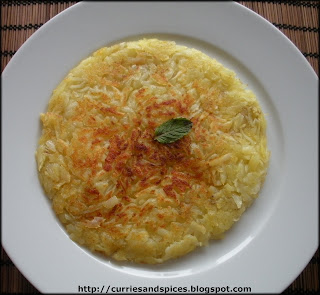 As promised in my previous post, Presenting you the Switzerland's very own "Rösti". Generally pronounced as "Rose-tee", the actual pronunciation would be "Roesh-ti" where you have to twist your tongue a bit when you pronounce 'o' and 'e'. Before going to the recipe, a few facts on Rösti (Ok you know I love to talk, even when blogging! ;) )

Potatoes, we all know, is one of the most versatile vegetable (or rather root) that has a special place in every other cuisine over the world. Switzerland is not far behind in honoring this yummy tuber ecstasy (as I call it!). Fresh potatoes are hand-picked by the farmers and used to make the delicious Rösti for the entire family. It is generally compared with "Hashbrown" but I beg to differ because both of them are different and tasty in their own way.

Ideally Rösti is a complete meal by itself; you can have it with a sauce of your choice. I prefer to have it as such for lunch without any accompaniment, it tastes wonderful! It is usually served in a plate or in the pan itself, in which it is cooked.

The recipe for Rösti also varies based on each Kanton. For 26 Kantons in Switzerland, you can find over 30 different recipes! First time I had Rösti in an Albis restaurant, I could not finish the entire portion because it was loaded with cheese and fat and I had to skip eating for next 2 days! ;) The idea of making it at home was nagging me since long, as I can have a control over the amount of butter I use. Now the time has come! And the best part was the first attempt itself turned out so good!

Since this is a speciality from Switzerland Cuisine, Rösti finds its way to EC's WYF: Speciality Food event.

How to do:
1. Boil the potatoes in their skin. Cool them and peel the skin. 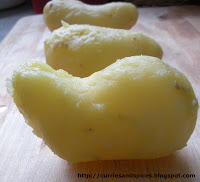 It would be better if you can boil them the previous night and let them cool. Potatoes must be firm and cooked and should not get mashed.
2. Use the bigger side of your grater and grate the potatoes into thin strips. 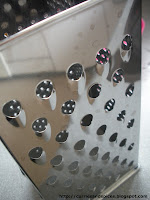 When using the grater, use only forward motion to grate the potatoes. i.e, Go from up to down, start again from the upper part without retracing. This way the strips don't break.
3. Season them with salt and pepper and give a gentle mix with a fork or slotted spoon taking care not to break them.

4. Melt the butter in the pan. Once the butter gets melted, swirl the pan so that it gets coated with butter all over including the rim. 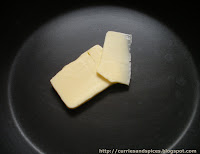 5. Transfer the grated potatoes to the pan and let them sit for 3 to 4 minutes. 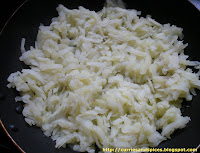 6. Now, pat them all together to make a pan cake shape and increase the heat to medium-high. 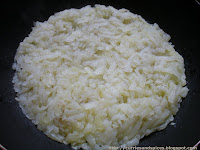 7. After about 4 to 5 minutes, (this is when the lower part starts to turn golden brown) cover the pan with a plate. 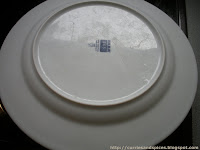 8. Hold the plate and reverse the pan. Transer the entire stuff to the plate. Now you will see that the bottom part is nice golden brown. 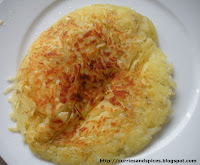 Don't worry if the shape disintegrates a bit now; it is usual. After putting it back to the pan, you can pat them again to bring back to shape. Grated potatoes are usually sticky and will happily sit together when patted!
9. Now slide the potatoes gently back to the pan and let this side cook for another 5 to 6 minutes on medium-high. 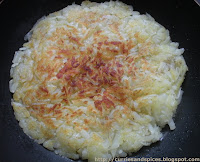 10. If you desire you can do the flipping again using the plate. Or else slide the Rösti to the plate and get ready to serve!! 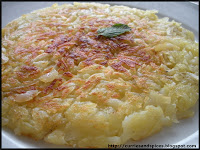 Variations:
1. You can use raw potatoes (by just peeling and not boiling them). They have a completely different taste.
2. You can also use butter with herbs (what we call here Krauterbutter), add onions, apples and fresh herbs like parsley, basil, thyme.
3. Those who eat non-veg, can add diced bacon to the mixture.
4. If you would like to incorporate cheese, transfer the cooked Rösti to the baking dish, top with grated cheese and bake it for 4 to 5 minutes before serving.
5. For Berner style Rösti, add a tbsp of milk, in Step 9 and cook for 3 to 4 minutes.

Readymade Rösti from the Supermarkets come really handy in many times; I use it to make any recipe that calls for mashed potatoes like Bonda's, tikkis etc. 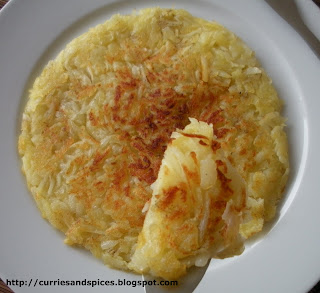 Have a wonderful weekend. See you all soon with another interesting post! Till then, happy cooking and happy Blogging! :)

this is one of my favourite b'fast dishes, though I make mine with parboiled potatoes. Yours looks absolutely perfect. First time here, lovely collection of recipes you have here.

my fav breakfast! love it!

Ahaa, Lovely and wish to have it immediately

Looks like home made Switzerland hash browns hon...I tried it once for my son but couldn't get the shape and never knew how the facts..thanks for sharing:)I would like to have a bit if it's ok :DD

Hey,
Looks yummy..Must be the Swiss version of a huge hash brown..I guess this will go as a nice side for bagel&omelet.

Just love rosti, i too prepared this rosti quite a two months back, time to make out again..Delicious!!

I looooove rosti... I see it as the sophisticated elder sister of the hash brown... which reminds me of my childhood. Fabulous post... Now I'm craving potatoes. :(

Send me some rosti please!

Lovely dish!! perfect for the potato lover in my house...will surely try it!!

Yes, I want to try some...:D That would a great breakfast item :-)Thanks for sharing Rohini...

This recipe is quite simple.I am a great fan of potatoes .Will surely try this.Thanks dear

We call this Hash borwns,and I have tried once but without boiling the potatoes,so could not bring it to perfect,yours is so perfect!

Nice recipe rohini,liked the step by step pics too...looks delicious and as usual lovely pic too

Simple one and delicious...

I am ready for anything with potatoes...thanks for participating with this tempting dish

Ro, superb recipe da! The grated potato pieces look very beautiful actually and give the dish a feathery look. When I saw the first pic before scrolling down, I didn't think it was made with potatoes. Perfect browning too. Super da :-). This should go well with ketchup also na??!!!

Sounds interesting and nice. lovely presentation. I am love potatoes in any form:)

I love a good rosti and this looks perfect.

That's a wonderful recipe. Looks as though it is too tough to make..:) but actually pretty simple. Great step by step clicks..

That surely is delicious and looks very tempting.

i tried hashbrowns once.but didnt turn out well.This looks very nice.and ur step wise pictures will surely help when i try this.
will soon try this.

oh wow!!! new one for me...a must try.looks really yummy.

looks absolutely yummy; can be served as a side dish for roasted meats too, delicious post!!

I was out this weekend and someone prepared an Awesome delicacy !
I had eaten in few times, never knew whats its called. Seems a sure try an yeah with the cheese ;)

new one for me!
Looks and sounds yummy.
Will def give it a shot, one of these days.

great recipe RO.it looks really delicious..who wud say no to potatoes and that too when its cooked this way?

A Beautiful Recipe from a Beautifuil Place. LOve ur presentation and ur step by step pictorial directions.

"Rosti" brought back memories when I was working in Switzerland ,Geneva. I have visited Zurich too. I miss Switzerland !!!

Thanks a lot for trying my Adraki Dal..looking fwd to ur post on that. Will try this Rosti.

Never thought preparing Rösti is so easy. I used to buy the readymade pack from Coop or Migros and prepare them :)

Hi Rohini,
Thts cool... I tried it too. It came very well. I added some paneer pieces too... :D

We are a professional interview transcription services company with a multi-lingual team that has a solid history of producing accurate copy.

Promote your Page too