Ram Navami or राम नवमी is celebrated marking the birth of Lord Rama, son of King Dasharatha of Ayodhya, and a divine figure in Hinduism believed to be an incarnation of Lord Vishnu. The day also known as Sri Rama Navami, falls on the Navami, ninth day of the Chaitra month of Hindu lunar year in 'Shukla paksha' or waxing moon, thus named Chaitra Masa Suklapaksha Navami, and marks the end of nine-day Chaitra-Navratri celebrations.
Source: Wikipedia

This version of Neer mor is my favorite. It has a good cooling effect on the body. Probably that is the reason why it is served during Rama Navami festival that falls in April, which is the on-set of summer in India.

Source: Wikipedia
Panakam is the drink made from Jaggery seasoned with cardamom, ginger and pepper powder. It has high medicinal values too. So, these 2 are those refreshing drinks I would like to have in anytime of the year! 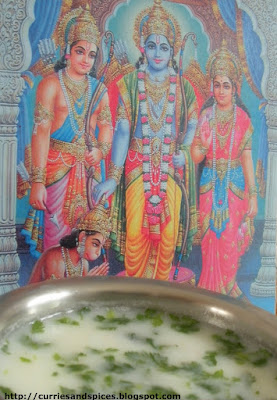 
How to do:
In a bowl, add curd, water, milk and whip well. Add all other ingredients, mix well and serve chilled. Stir well before drinking.


If you do not want to pick out the chillies, coriander or ginger, grind together all these ingredients and mix it with the buttermilk. 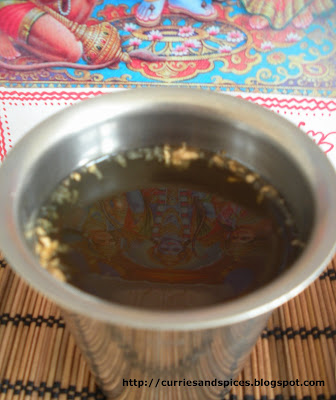 Trying to capture the reflection of Lord Rama in the panakam


How to do:
In about half a cup of water, dissolve the jaggery. Drain to remove any impurities. Add water and mix all other ingredients. Serve chilled.


Now coming to the event part, this is the first event I am participating since I started blogging. Sending this entry to WYF: Festive Treat Event at Simple Indian Food

Buttermilk is lower in fat and calories than regular milk because the fat
from buttermilk has already been removed to make butter. It is high in
potassium, vitamin B12 and calcium. Buttermilk is more easily digestible
than whole milk and it also contains more lactic acid than skim milk.

Happy dusshera to you and your family rohini....thanks a lot for dropping by and leaving a lovely comment as well as joining in....love to have chilled spiced up buttermilk everyday...looks very nice, pics r lovely too...

Loved the pic with Ram in the panakam..thanks for participating

Thank u so much rohini for visiting my blog. nice post for the event.I too loved the pic of rama in panakam.BTW the pori upma is tempting.So easy to cook. will give a try soon. Thanks to ur mil.

Lovely post. I love panakam and neermor. Can something be as comforting as these for the summer! :)

Here for the first time I guess. But would be back often. You have a lovely blog. keep it going.

do take a peep into mine when you find time.

@ Sushma, EC, Jeyashri, Nithya, A 2 Z Vegetarian Cuisine: Thanks a lot lovely ladies. Your support is what keeps me going! :)

Thank u for stopping by and leaving ur sweet comments rohini,panakam and neermor looks amzaing!!!U too have a wonderful blog dear..:)Keep rocking!!!

I love both of them... Thank you 4 sharing..
I didnt recive your email on the event... Wot is it about?
Do mail me at sandhyaskitchen@yahoo.com

Promote your Page too